Trinidad: a burst of colours under the rain - Breathe With Us 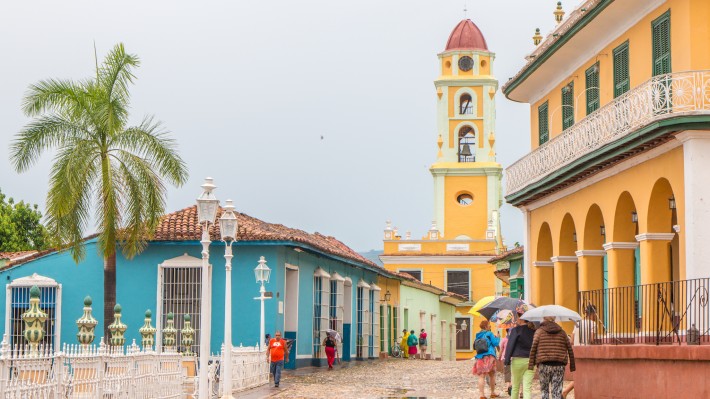 Trinidad is one of those places that everyone should include in their itinerary for a visit to Cuba. Like us, travellers flock to this 500-year-old town in central Cuba, considered to be one of the most well-preserved colonial towns in the Caribbean, due to its historical centre and colourful architecture.

Colour is everywhere in Trinidad. An array of vibrant colours is used throughout the town to paint its many houses and buildings. It almost feels like time stood still in Trinidad, the cobblestone streets and buildings in the historical centre make you go back in time and still look like they did in the town’s wealthy days. Trinidad is a UNESCO World Heritage Site, together with the nearby Valle de los Ingenios.

Not everything in travel is perfect and our two days in Trinidad were blessed with some rain – pretty much the only rain we had in Cuba! Hot and rainy. That’s what we had but we figured how to take the most out of it and still enjoy our time in Trinidad.

Here are some ideas for visiting Trinidad!

Plaza Mayor is the heart of the historical centre in Trinidad and is like an open-air museum of Spanish colonial architecture. All of the elements, colours and decorations are there and are quite a spectacle to enjoy. Naturally, this is where every single visitor goes to. Not to worry, it doesn’t get that busy! After all, this is Cuba.

Wealth came to Trinidad with the boom of the sugar production in the 18th and 19th centuries. This was when most of the buildings at Plaza Mayor and surrounding streets were built. All of the sugar lords wanted a house there. Nowadays, many of these houses have been converted into museums and restaurants, amongst other things.

The best way to explore the historical centre of Trinidad? On foot, of course. This area is car-free and quite compact, which is great… even when it rains!

A typical house in Trinidad

Once at Plaza Mayor, Iglesia de la Santísima Trinidad dominates the view from the top of the square, but a lot of other interesting buildings are worth a visit.

If you like museums, there are 4 very close to each other. Museo de Arquitectura Colonial, housed in a former mansion where you can learn more about colonial architecture. Museo de Arqueologia Guamuhaya, where you can see some local archaeological findings. Museo Romántico at Palacio Brunet, an excellent example of a wealthy decorated mansion. Museo Histórico Municipal at Palacio Cantero contains the history of Trinidad and a viewing platform at the top of its tower.

We visited Palacio Brunet and Museo de Arquitectura Colonial while waiting for the heavy rain to calm down.

Opposite to the Iglesia across Plaza Mayor is Casa de Aldemán Ortiz, an art gallery and handicraft shop. We recommend visiting, not only because of its interesting local art collection, but also because of the balcony that faces Plaza Mayor and offers privileged views.

Music is part of Trinidad’s life. Casa de la Música and Casa de la Trova are two of the main places to go for live music around Plaza Mayor. Virtually all the restaurants of this area will offer live music as well during the evening.

Plaza Mayor in the evening

Want to travel independently in Cuba? Read our guide with all about driving in Cuba!

Very close to Plaza Mayor, and easily visible across town, is Iglesia y Convento de San Francisco. Originally from the 18th century, not a lot is left from that time. Only the tower was spared.

The views from the top of the bell tower are the best in town! Plus, it’s the symbol of Trinidad and you can also find it on the 0.25$ (CUC) Cuban coins.

The church houses an interesting museum – Museo de la Lucha contra Bandidos, which translates to “Museum of the War against the Bandits”.

Plaza Mayor from the top of church

The streets of Trinidad

Don’t forget to visit the side streets around Plaza Mayor and the rest of the town. We did it and found a lot of interesting things around every corner. Don’t forget to say ‘hola’ to the friendly Cubans you’ll encounter along the way.

Rainy day on the streets of Trinidad

Locals waiting for the rain to stop

Trinidad’s historic centre is very compact and easy to navigate. It’s natural to venture a bit further out without evening realising it. One place worth checking out is Plaza Santa Ana, where an 18th-century church with the same name is located.

And, if you have time, a favourite place for the locals is Parque Céspedes.

Trying to stay away from the rain

An evening out in Trinidad

One of the highlights of our visit was the evening we spent eating out and having some drinks while enjoying some live Cuban Son. The area around Plaza Mayor is where most of the restaurants are located and where everyone seems to go.

Best part of the night? The 90-year-old restaurant owner joining the band to show his dance moves!

An evening out in Trinidad

Live ‘Son’ music at a restaurant

Other things to do nearby

It’s possible to spend a few days exploring this part of Cuba while staying in Trinidad. Here are some ideas:

Like other Cuban cities, Trinidad has a huge number of casas particulares and also a few hotels. We stayed at Casa Norelvis y Liubetsy, probably the best we stayed at during our time in Cuba.

Want to stay local in Cuba? Read our guide about casas particulares!

The only option to get to Trinidad is by road. We drove, but the most popular option seems to be the Viazul buses that are available to and from different cities across Cuba. Taxis are also an option for those travelling in a group.

Have you visited Trinidad or other colonial towns? Let us know what you think! 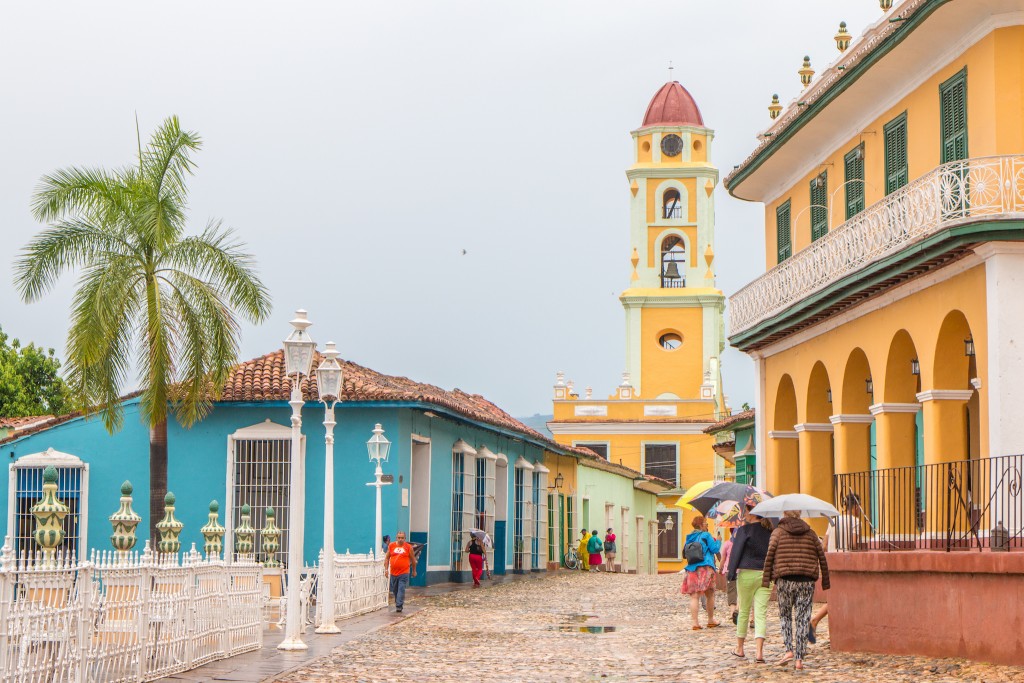