Petra, the rose-red desert stone city - Breathe With Us 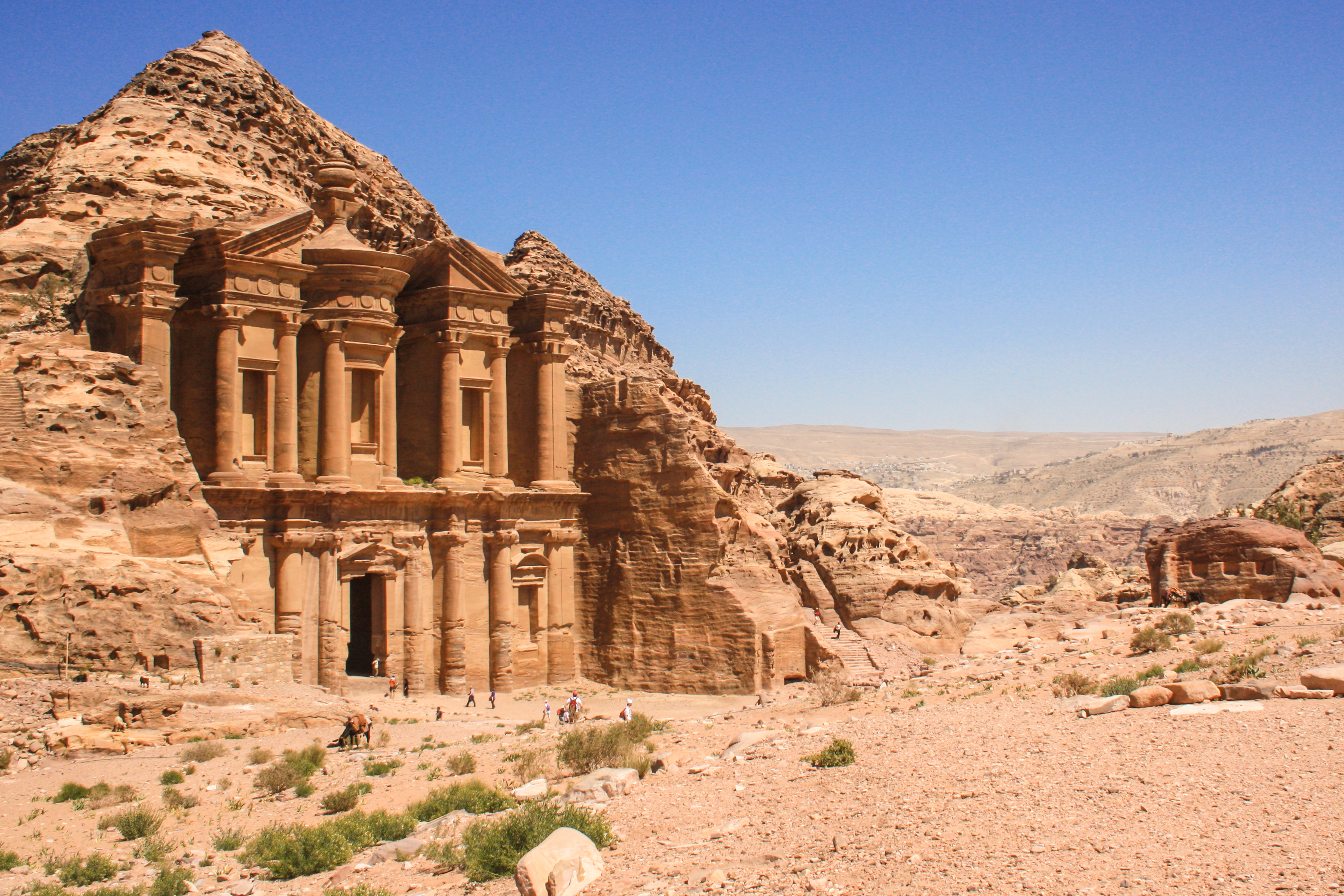 Petra is the symbol of Jordan and its major attraction, bringing a huge number of tourists to this UNESCO World Heritage archaeological site, now one of the seven wonders of the world. Its fame is more than deserved and certainly lives up to the hype of being one of the most sought-after places by travelers.

Petra’s buildings carved in the red stone by the Nabateans for centuries are so spectacularly detailed and architectured they seem somehow impossible to create. Plus, there are so many of them that it could take days to explore everything, and apparently it is believed that there are way more yet to be found. 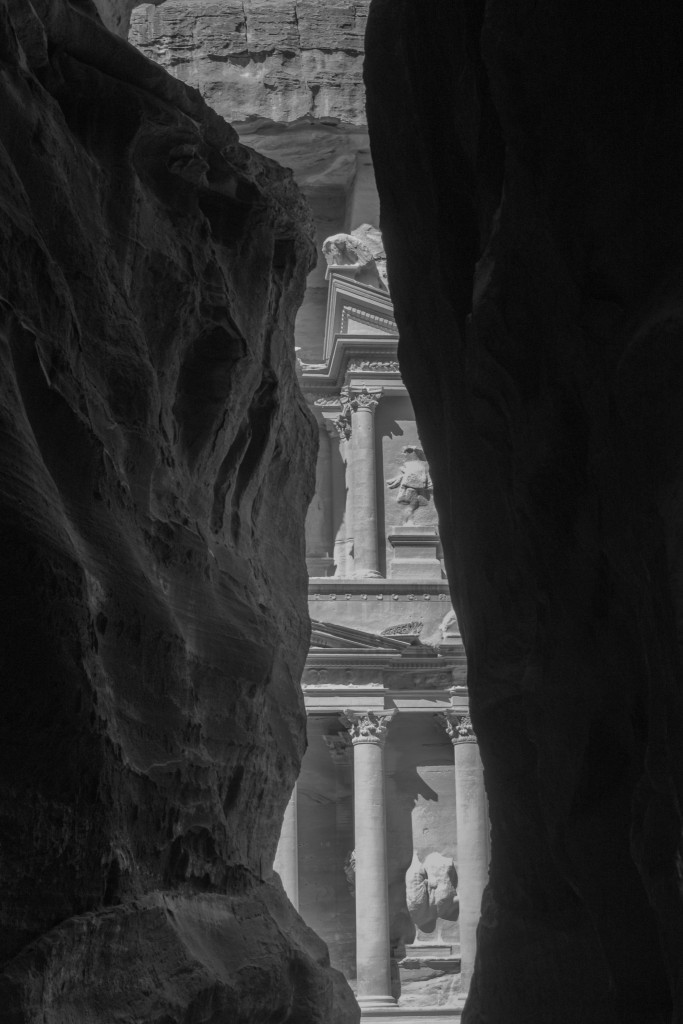 Siq and Al Khazneh – The Treasury

Petra is located between the Red Sea and the Dead Sea at the edge of the mountainous desert of Wadi Araba. Historically, Petra was for centuries the capital of the Nabateans and a major caravan trade center and route. Later fell under the Roman Empire and ultimately became abandoned until being found again in the 19th century.

Nowadays, after a lot of excavation work, Petra showcases an interesting mix of Nabataean and Greco-Roman architecture 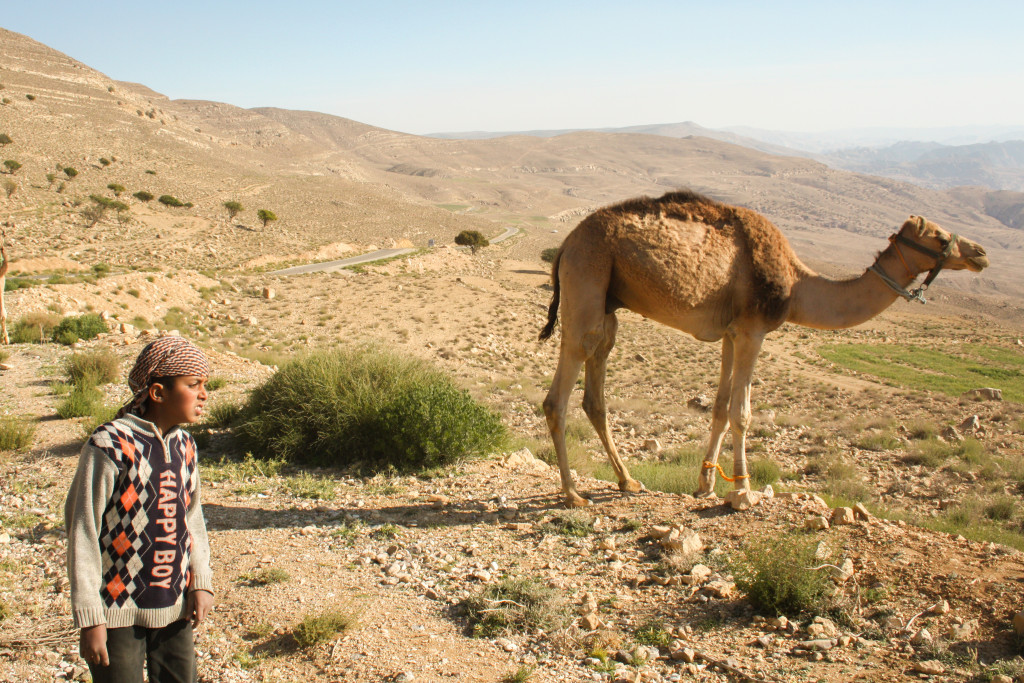 Our expectations were quite high, especially after reading and seeing pictures of Petra. Everyone must feel like this. During the two days we spent in Petra, we managed to visit Little Petra and do Petra by night on the first day, and a full day exploring the main sites on the second. All of this with our knowledgeable Spanish-speaking Jordanian guide. We stayed in Wadi Musa, conveniently in a hotel right at the doorstep of the entrance to Petra archaeological park.

Little Petra is how a small archaeological site in Siq al-Barid is known today. It works wonderfully as a first introduction to Petra. There are a few tombs and temples worth visiting, together with the canyon that leads to a wonderful viewing area towards the mountains. At the top, there were a couple of Bedouins hanging out and drinking tea. As a signal of respect, we didn’t photograph them, per their request. 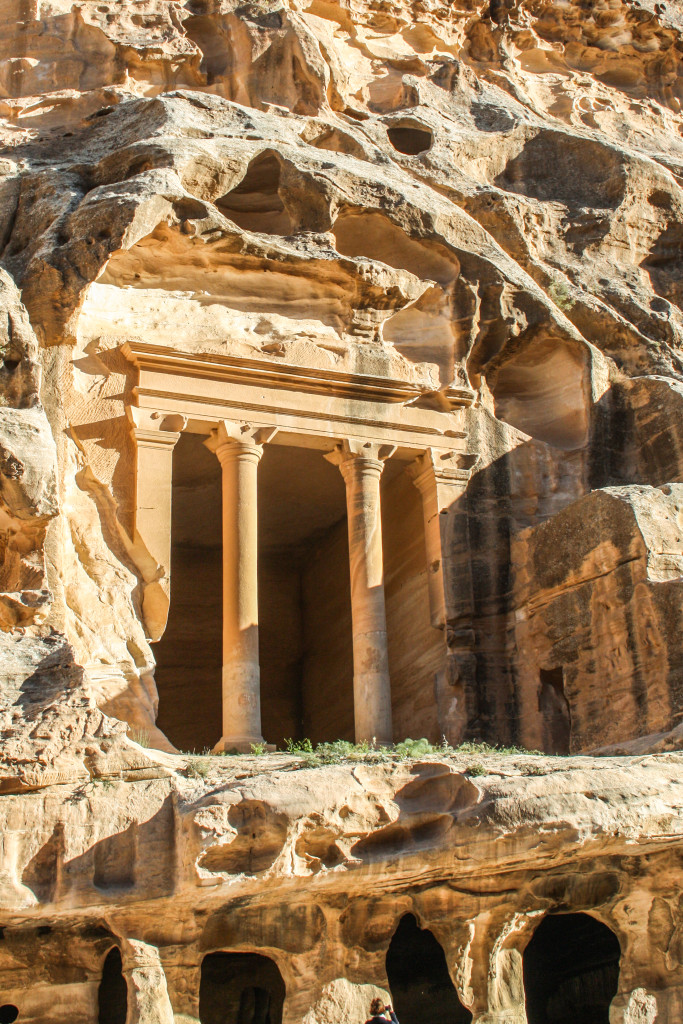 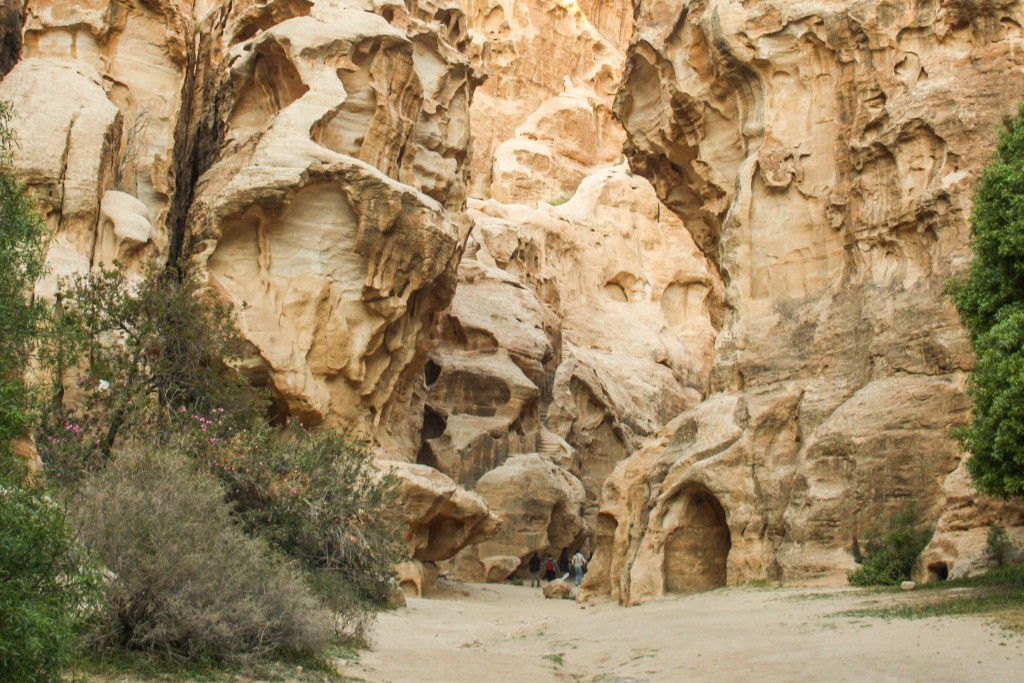 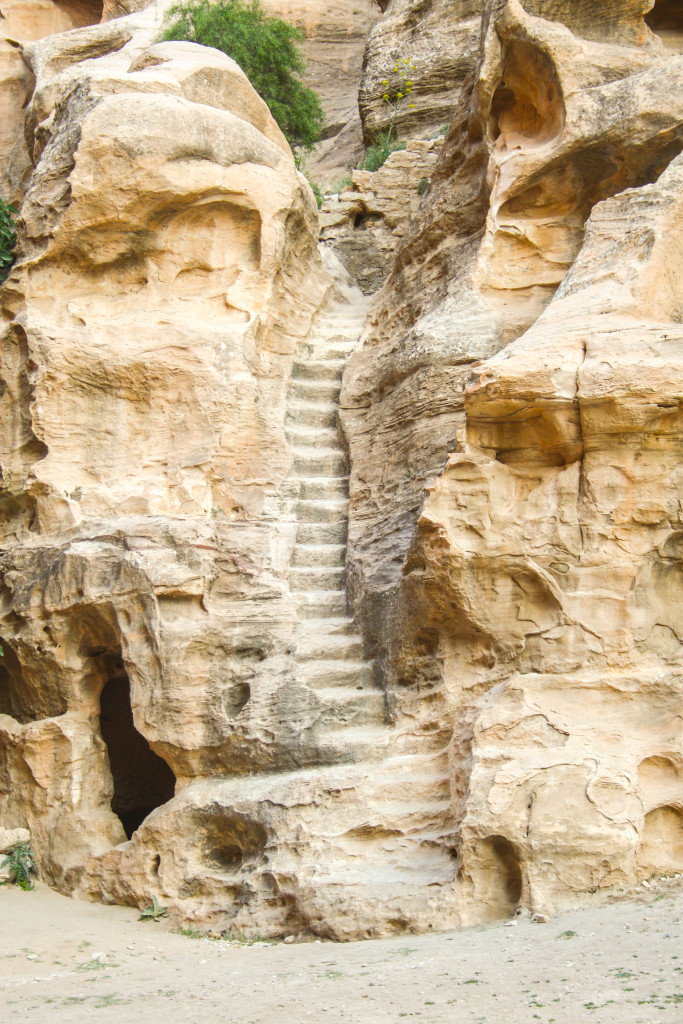 One of the many mini side trips

Overall we probably spent around little less than two hours visiting this area. More than enough to get our hopes high for what was coming next.

This was the surprise of the day. Late afternoon, just when we were arriving at the hotel, the guide mentioned that there was a Petra by Night session that night, which is not held daily. Almost everyone in our group said yes and the guide disappeared to try to get tickets. Luckily he got them and we rushed to an early dinner in order to be ready by 8 PM, shortly before the session began.

Petra by Night is a unique opportunity to see a different and more intimate side of Petra, with candlelight illuminating the Siq all the way to Al Khazneh, The Treasury. The glow of light from the candles on the façade is spectacular. It runs from 8.30 to 10.30 and even during the warmer months it can get chilly, so bring a warm layer. There is a performance with traditional Bedouin music where everyone just sits on the ground, silently enjoying the atmosphere. Don’t forget to check if during one of your nights in Petra this is available! 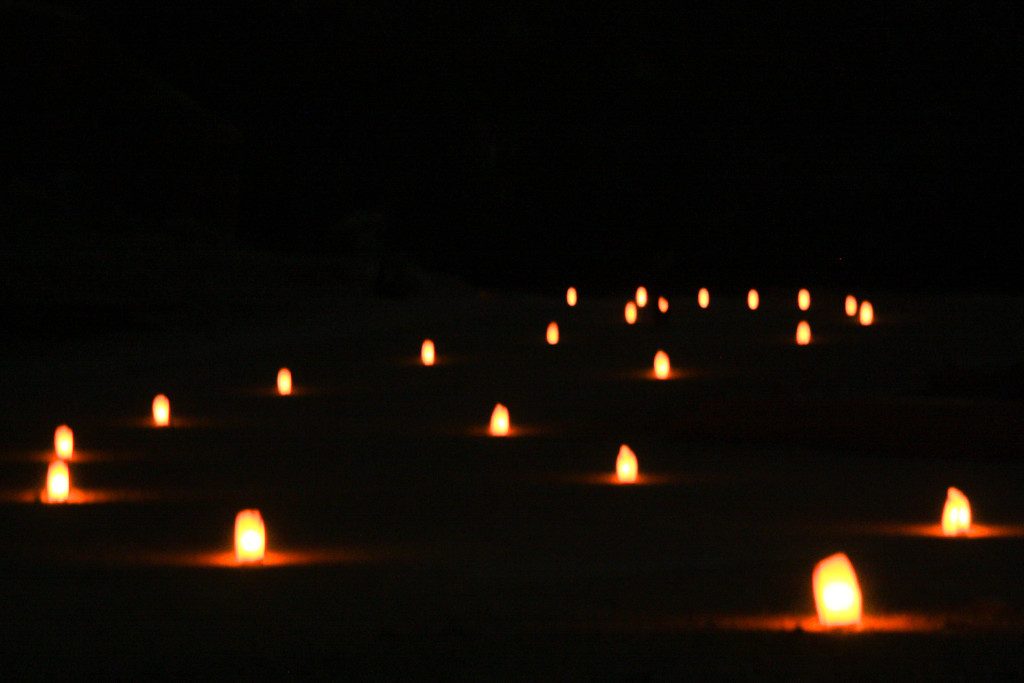 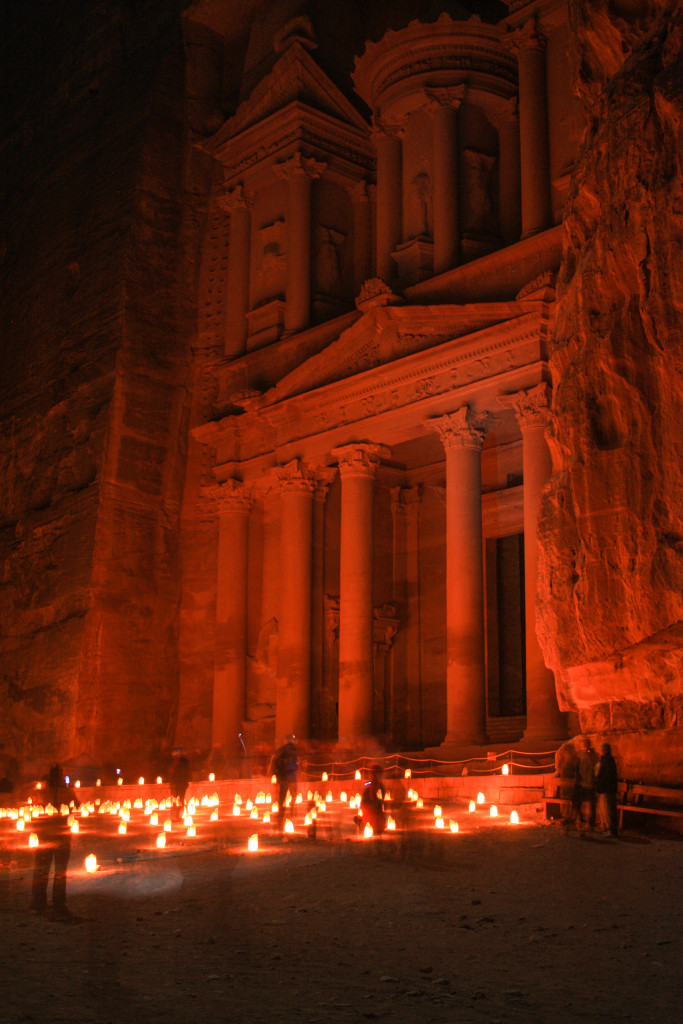 Al Khazneh, The Treasury at night

An early morning start for what was a long day in the making. After briefly seeing Petra by night the day before, we were really looking forward to exploring more of what Petra had to offer. And believe us, there is WAY more. Entering the Siq.

Going through the Siq in daylight is very different. It allows having a better perception of detail. The water conduit system, for example. It’s amazing how evolved the Nabateans were. They managed to control water through a system of conducts, dams, and cisterns, making it possible to live in such an isolated place. Along the Siq, some of these implementations are still very perceptible. The Siq itself is a narrow gorge with a bit over 1 km length and an amazing gradient of colors created by the light on sandstone. At the end of the Siq is the first major highlight – Al Khazneh, The Treasury. In order to better preserve it, the interior is off-limits. Don’t worry, most of the tombs and temples are empty inside. 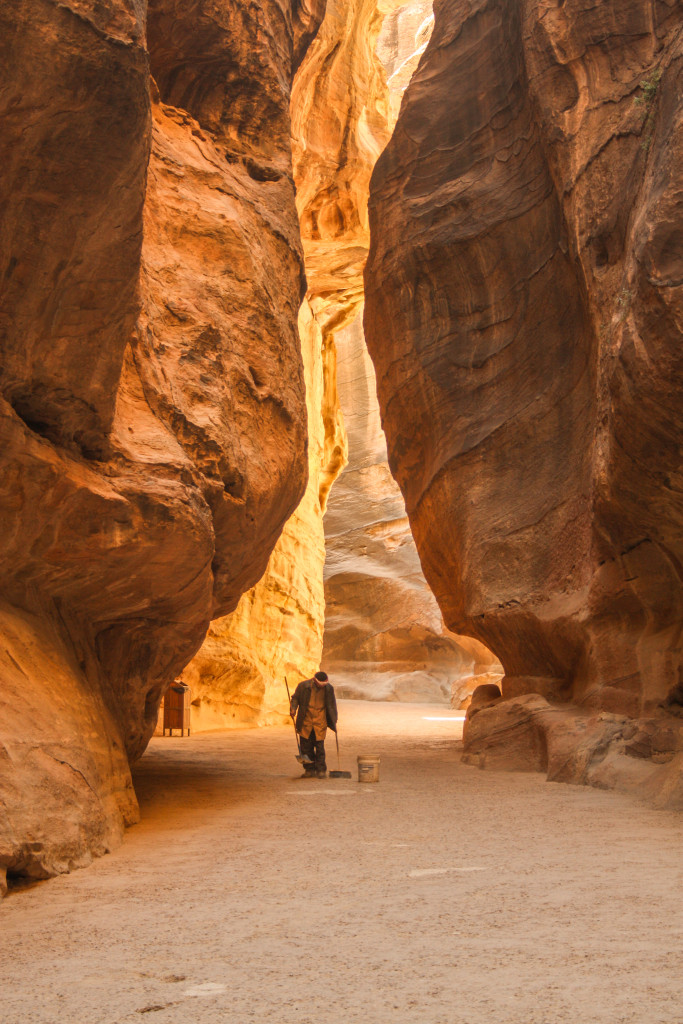 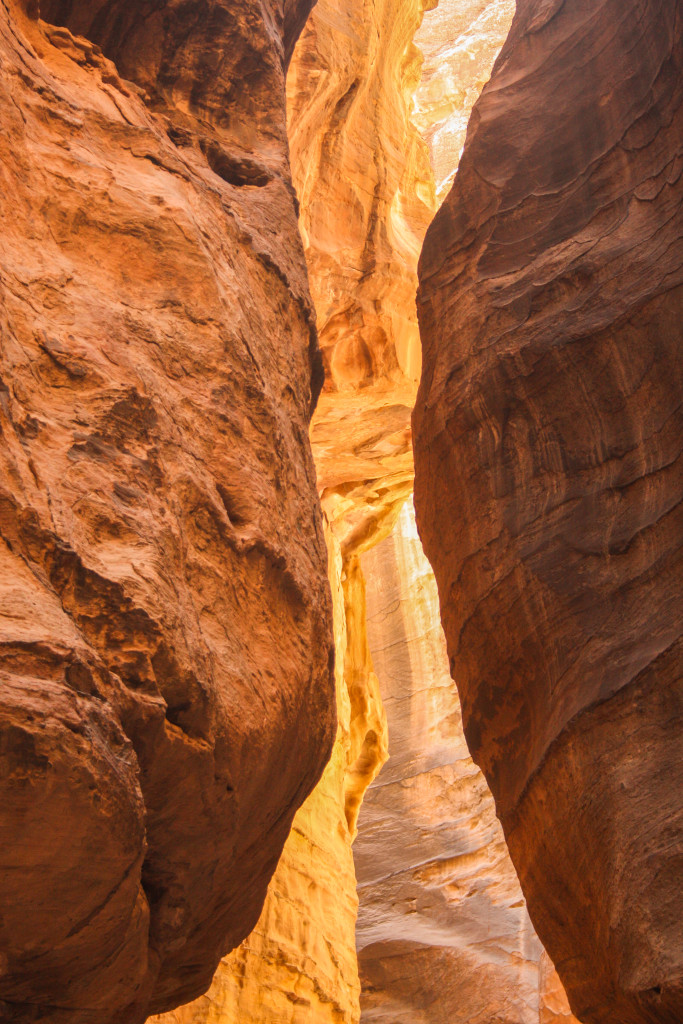 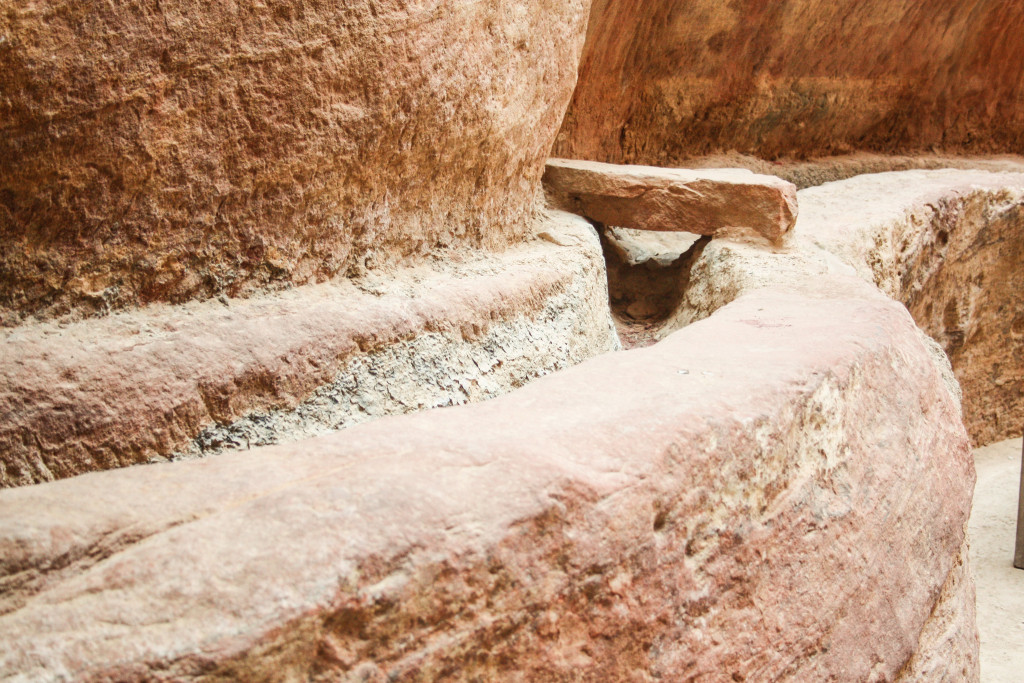 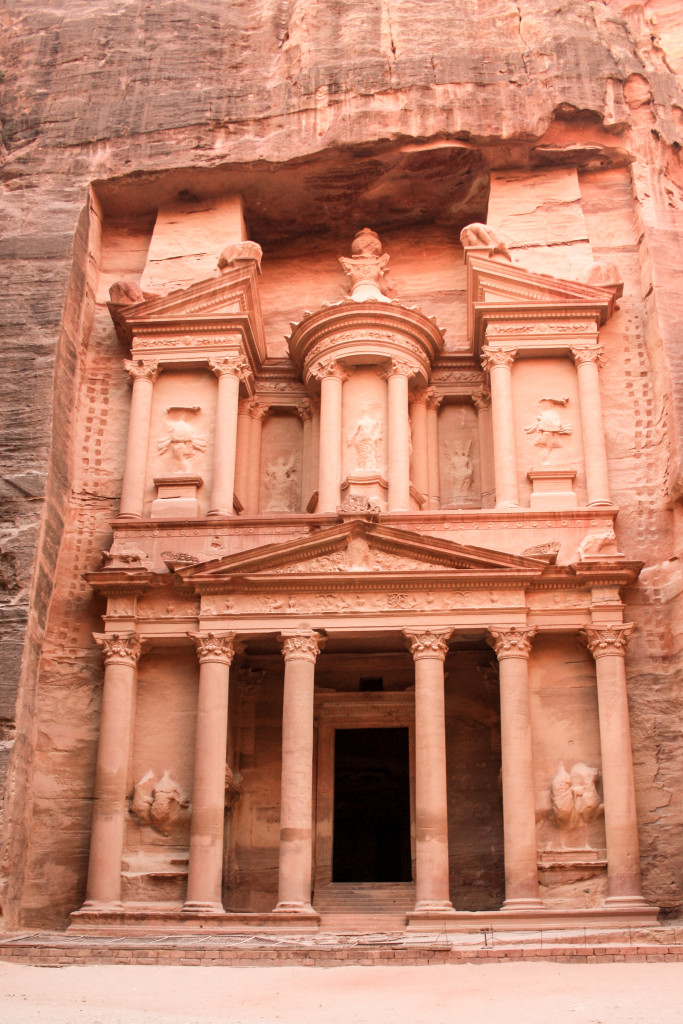 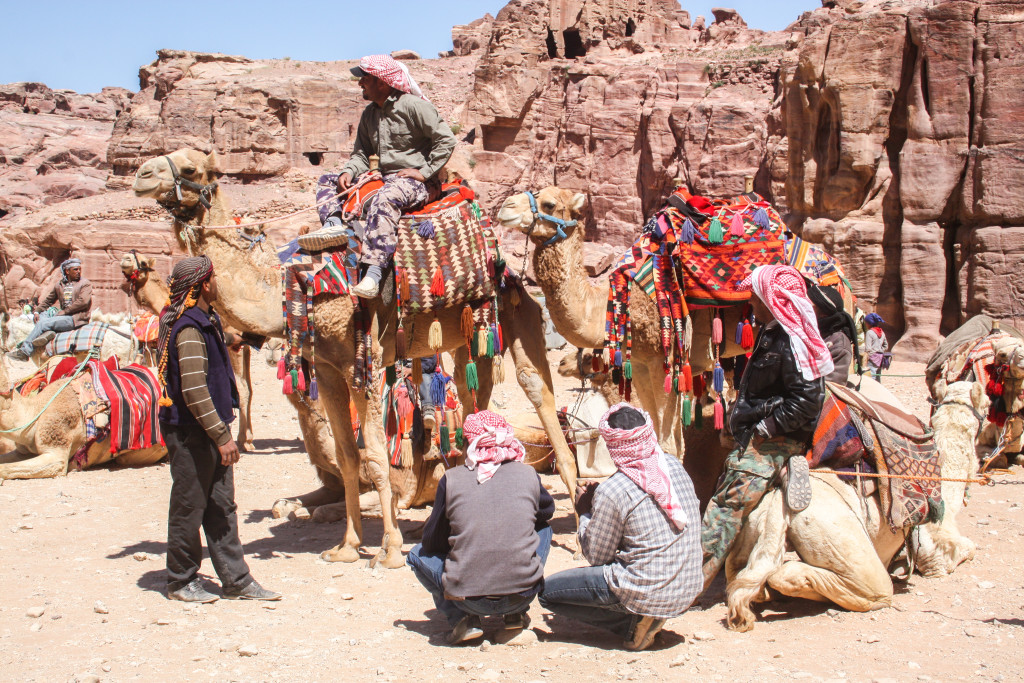 Early in the morning the place already bustled with tourists. Stalls now available to sell all sorts of souvenirs and also camels and donkeys available for hire, for those not willing to walk. “Camel ride?”, “Donkey ride?”, are common whispers one hears. As the sun rises, the temperature starts to go up.

Petra has different trails available and at this stage we were still on the main one, that runs through the central area of the park. We follow it along the street of façades, a set of tombs of important Nabateans, some very tall, other less rich and smaller. To better contemplate the view of this area, we make a small side deviation up the hill to reach a higher point. From the top, the view towards the big Roman theatre is great and well recommended to better understand its dimensions. 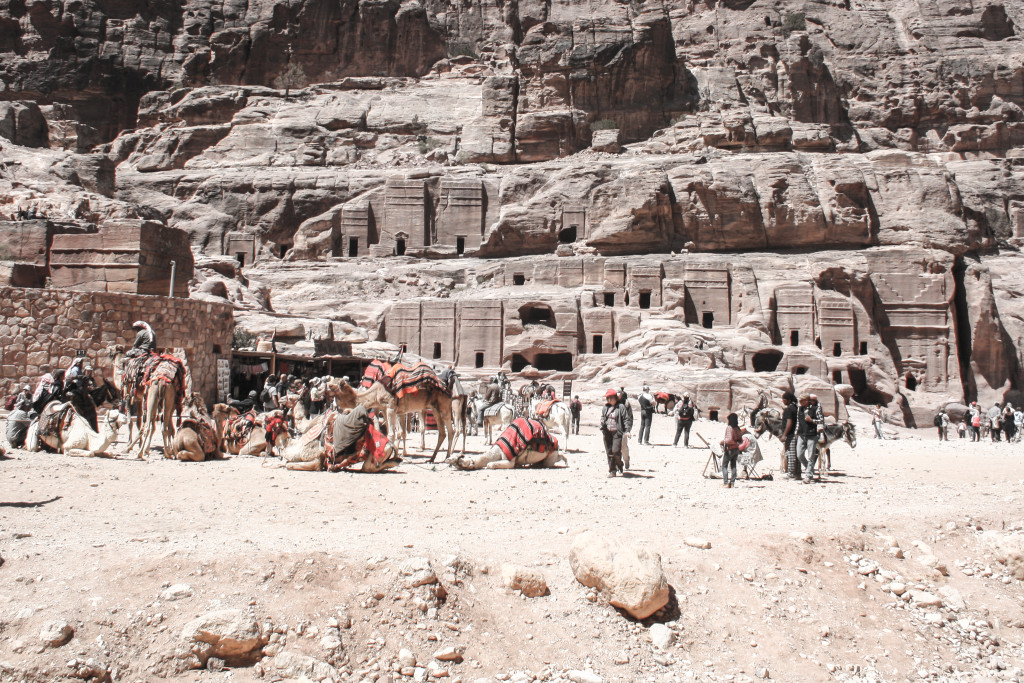 The street of facades 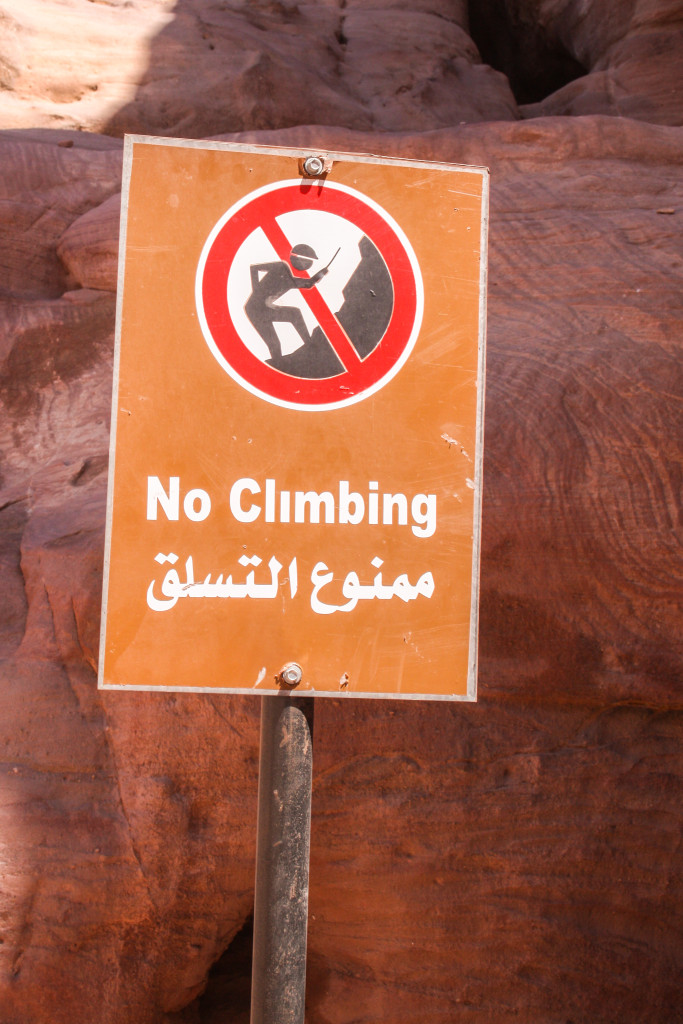 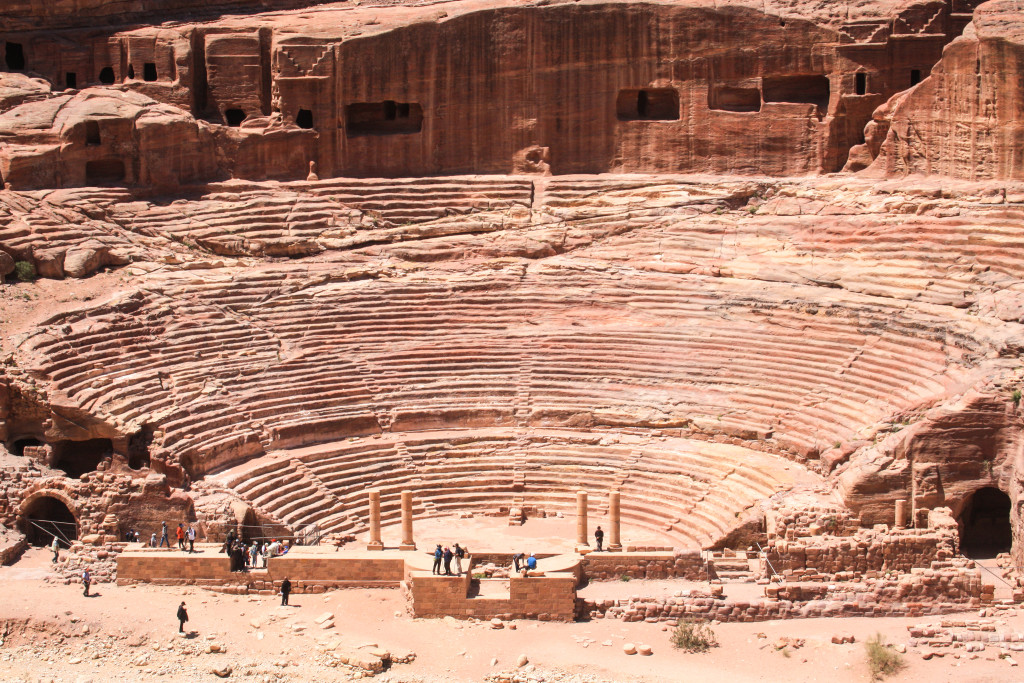 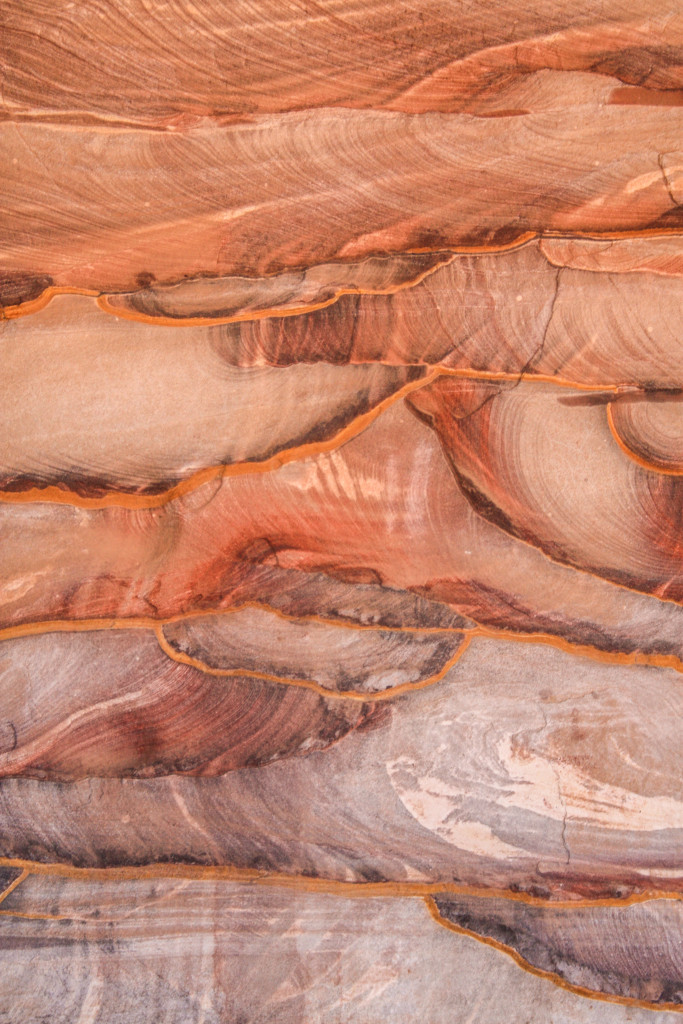 Look at this color

There are many tombs where it’s possible to go inside and see the stone-cutting technique and the different colors of it. Unfortunately, some people leave trash inside some of them – buh!

Back on the trail, we enter the final stretch of which the guide would be accompanying our group. Next to the Colonnaded Street are a few buildings worth visiting: the Nymphaeum, the Byzantine Church, The Great Temple and the Winged Lion Temple. At the end of the street are the museum area and a restaurant. The main trail ended and so did our guided tour. 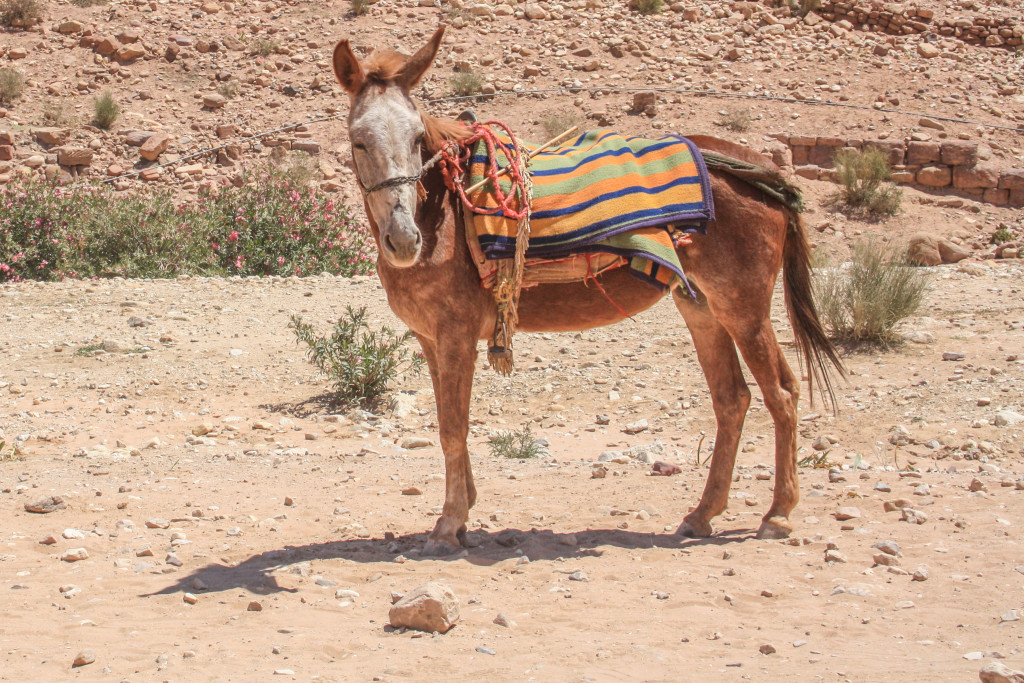 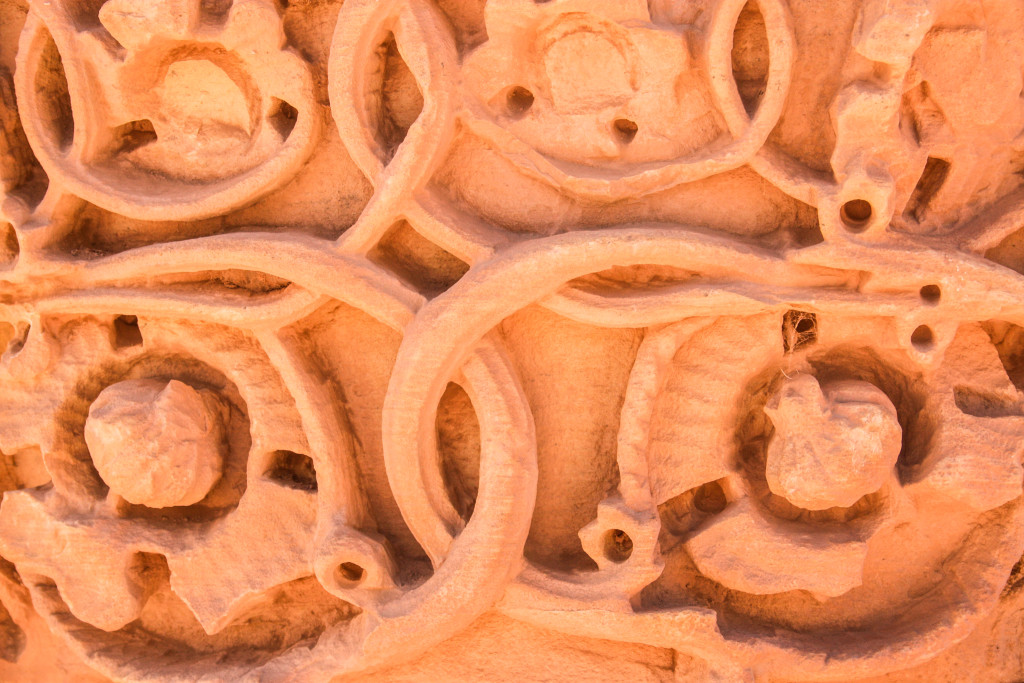 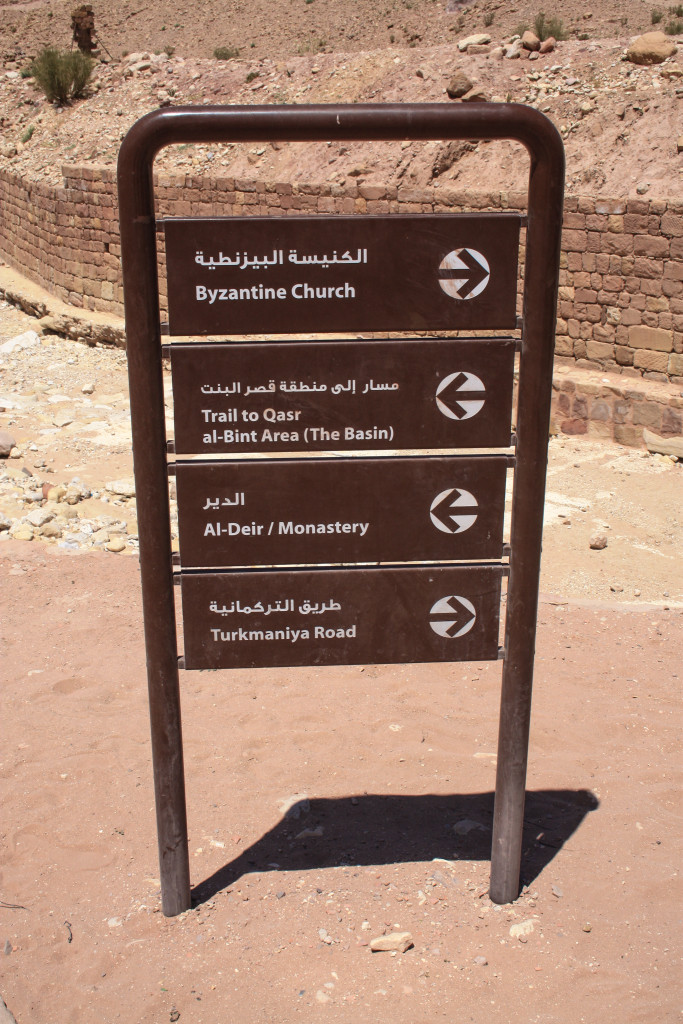 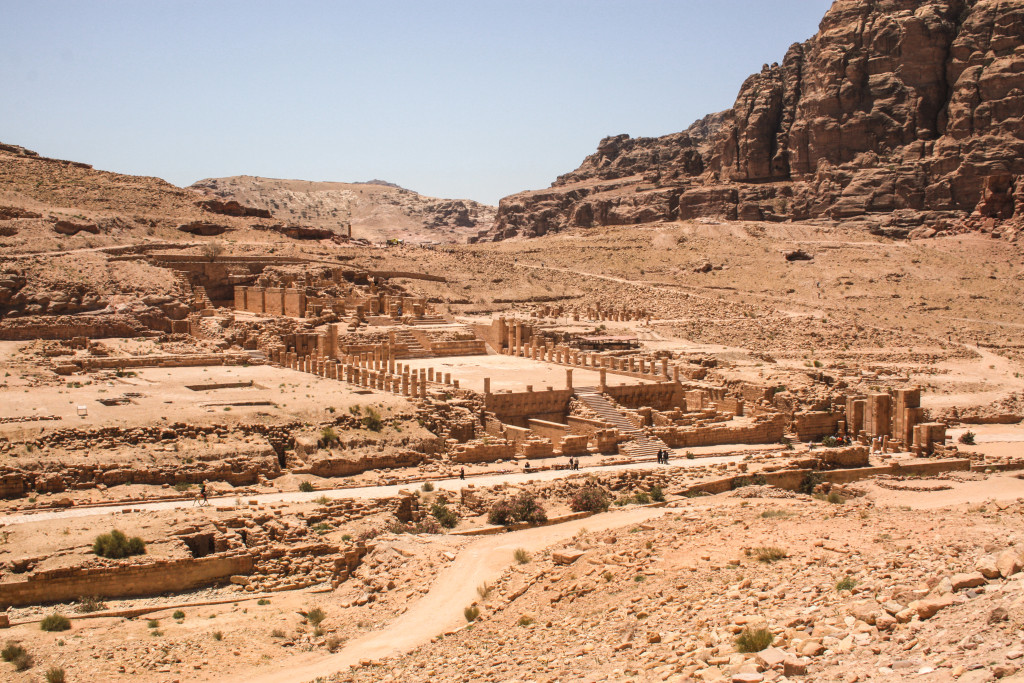 From here on everyone was free to do whatever they wanted. We decided to go to the second most important highlight of Petra – Ad Deir, The Monastery. The trail is not easy yet doable for anyone relatively fit. It goes up the mountain with some very steep sections, which in turn provide amazing views, namely towards the Royal Tombs. Finally at Ad Deir, wow! Even better than Al Khazneh. Plus, less crowded. It’s possible to go inside this one by jumping inside. For the more adventurous there’s also the possibility of imitating the Bedouin that was having fun on top the building, jumping around. All sorts of madness.

The best view is still a few meters away and allows for an overview of the area and even further to the mountains on the other side. A couple of signs like: “Best view in the world” or “View of the end of the world” indicate the path. At least 2 hours is the ideal time to fully enjoy the area. 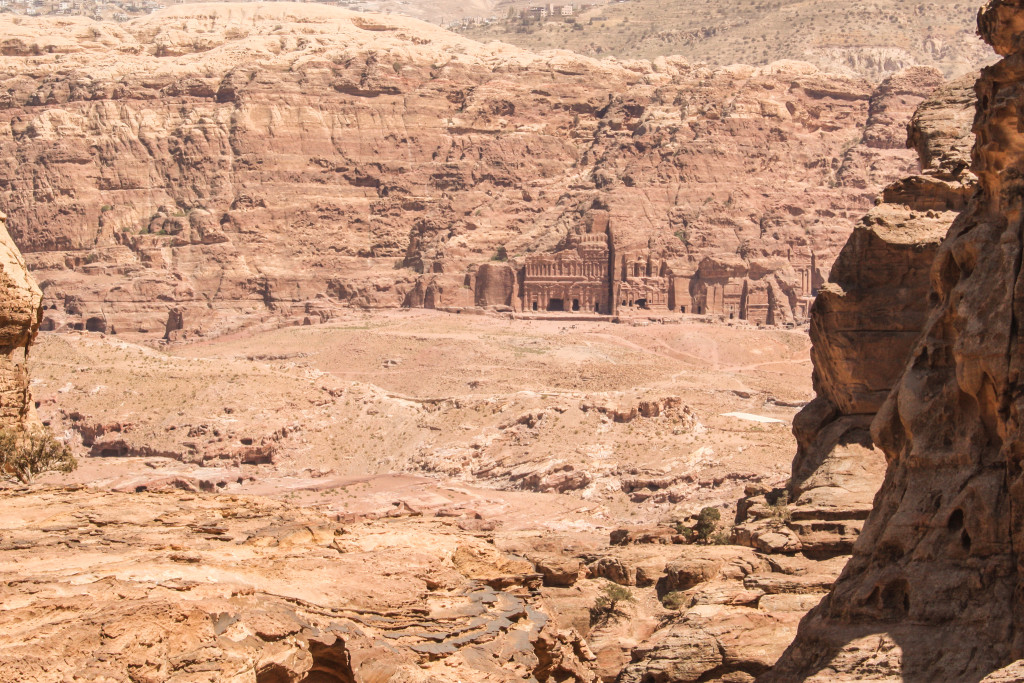 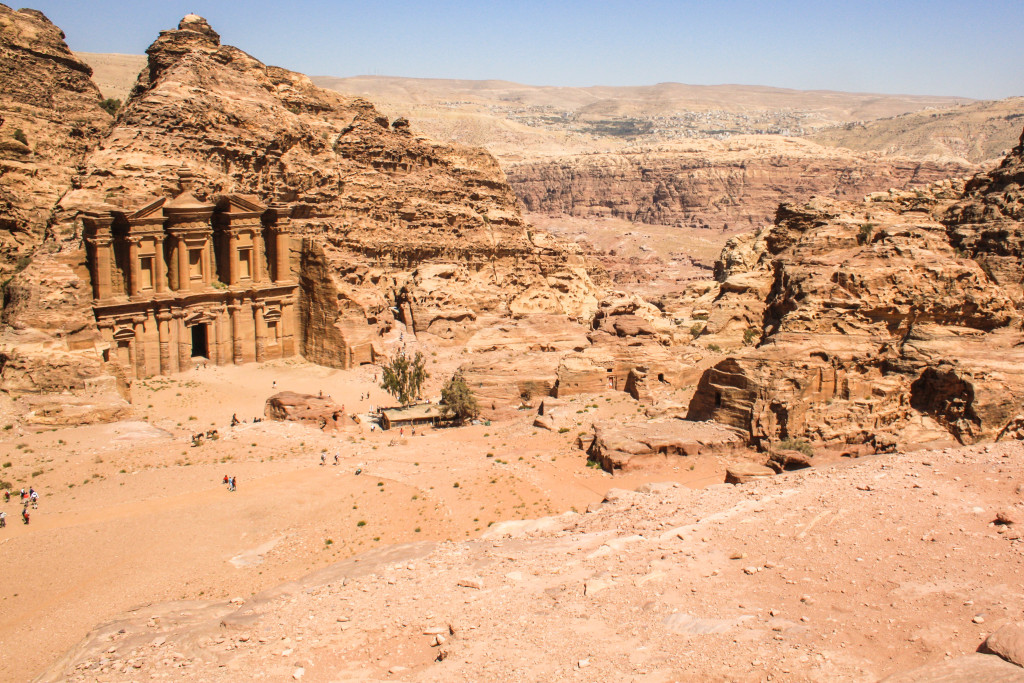 On our way back and after backtracking the Colonnaded Street we went to explore in more detail the Royal Tombs. These tombs are some of the best ones. Our favorite one was the Urn Tomb, that has two floors where it is possible to go up and inside the rooms.

By mid-afternoon, most of the people already left or were about to. We still had more than two hours before the closing of the park and we intended to make the most of it. Our final trail of the day was up to the High Place of Sacrifice, another steep climb. People around us? No one. We were left completely alone at one of the highest points in Petra at sunset. We probably spent more than half an hour just at the top admiring the view. What a great view! Eventually, we made our way back and out of the park, right before closing time. 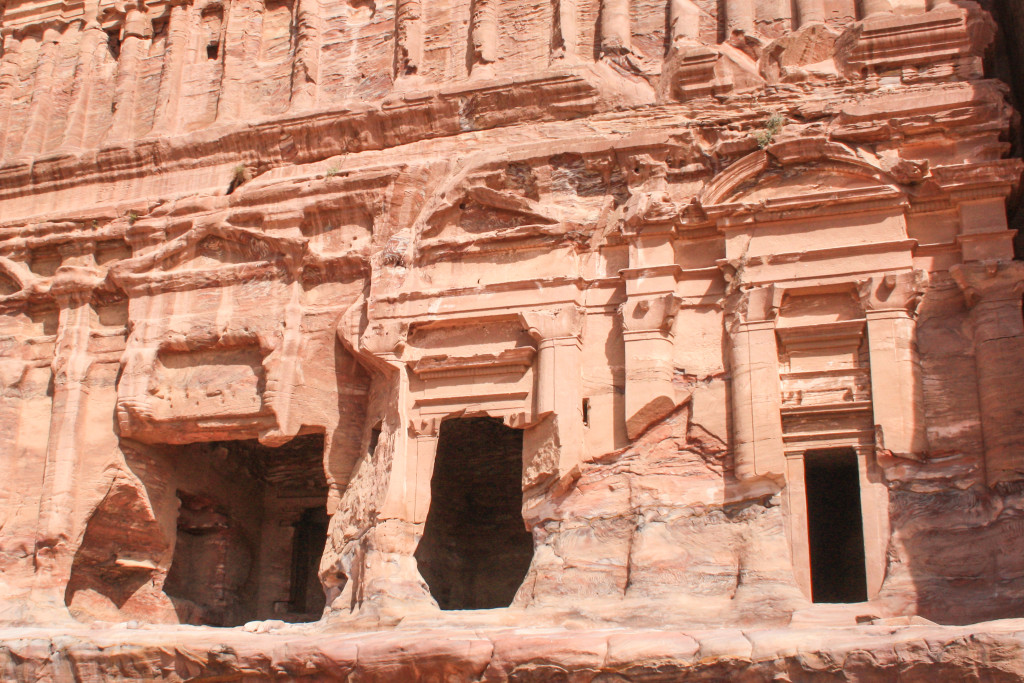 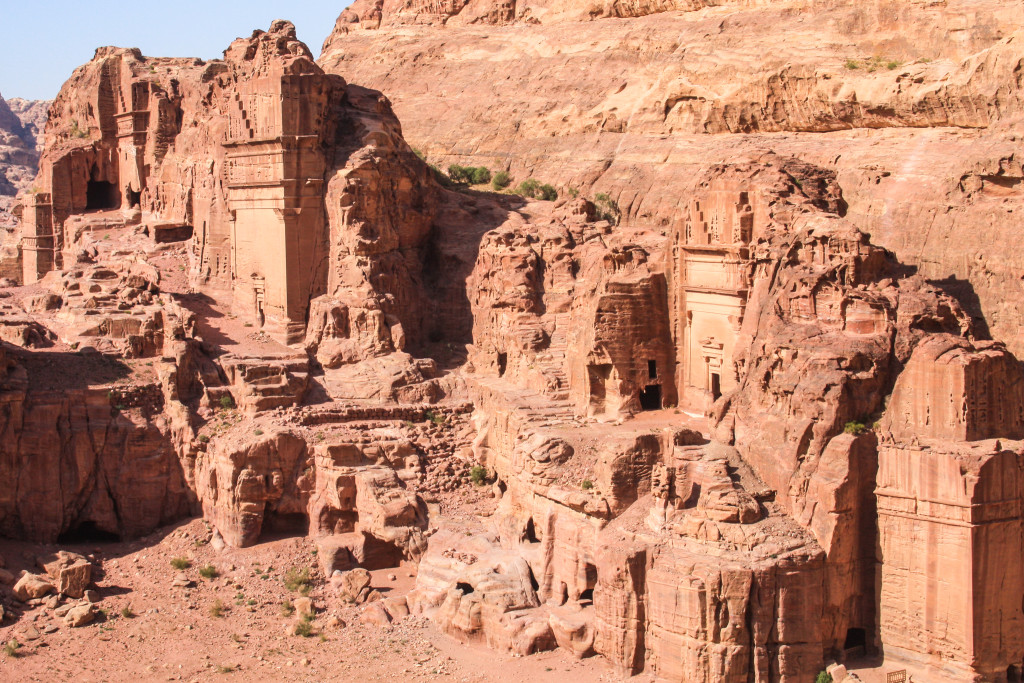 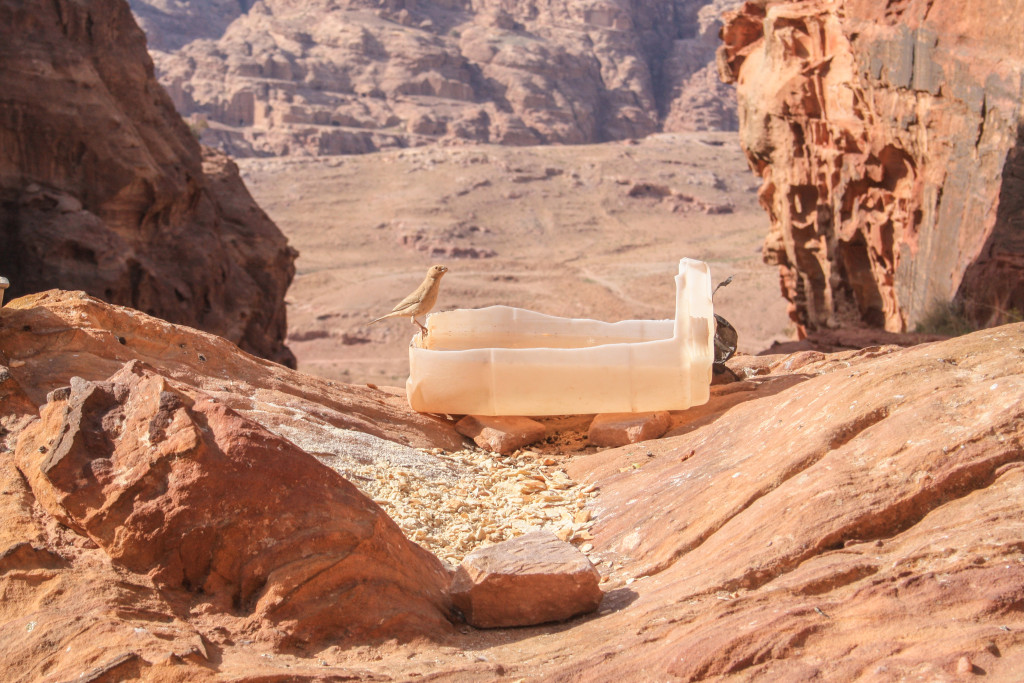 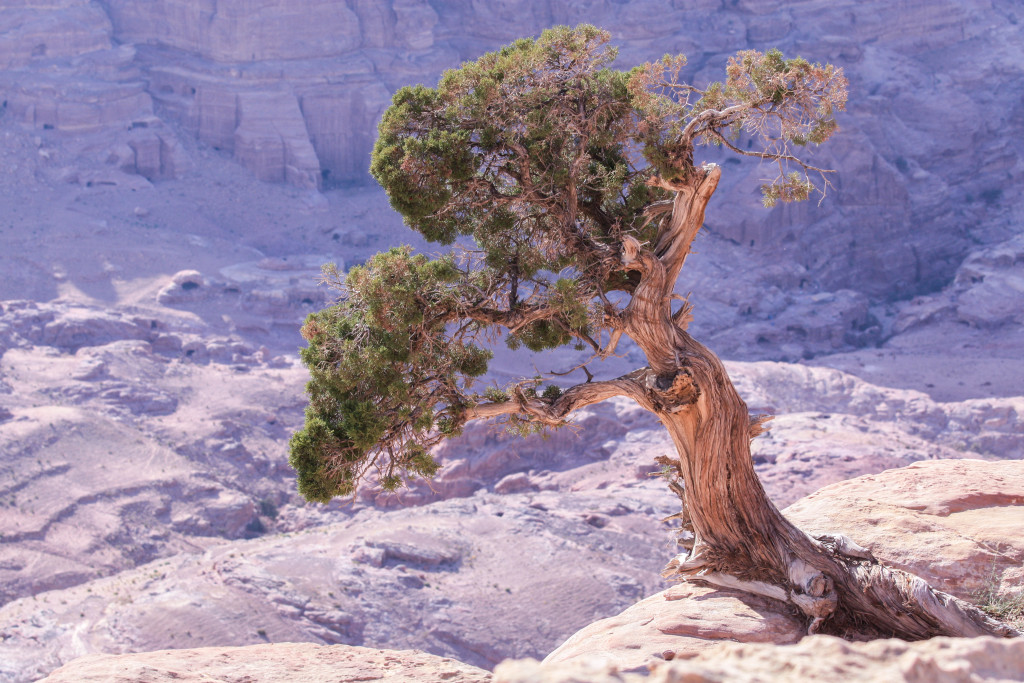 Sunset at the High Place of Sacrifice 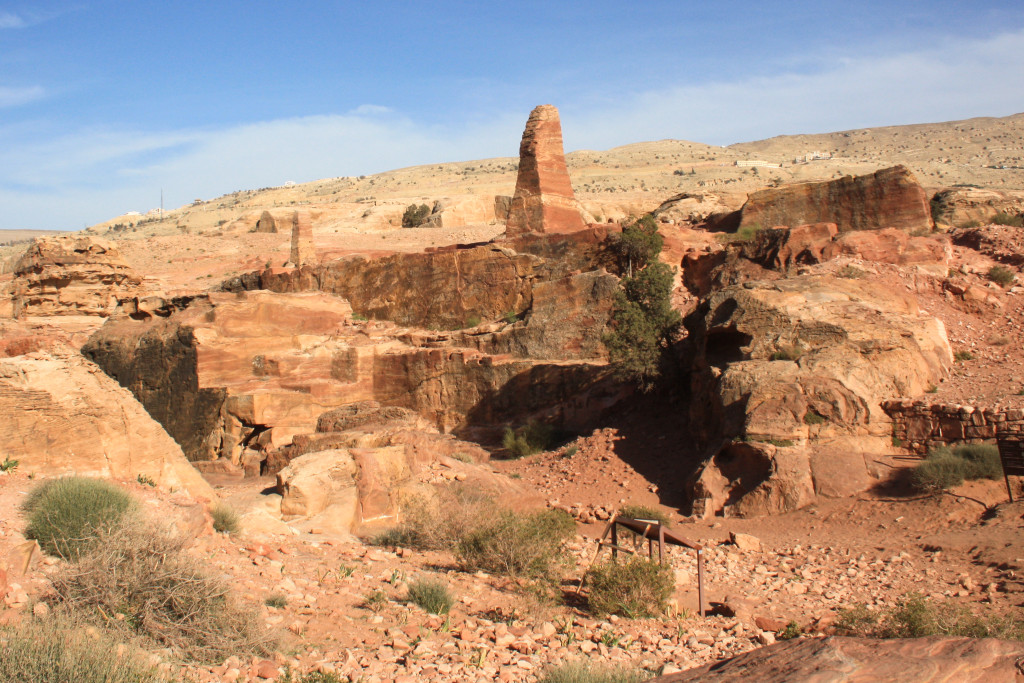 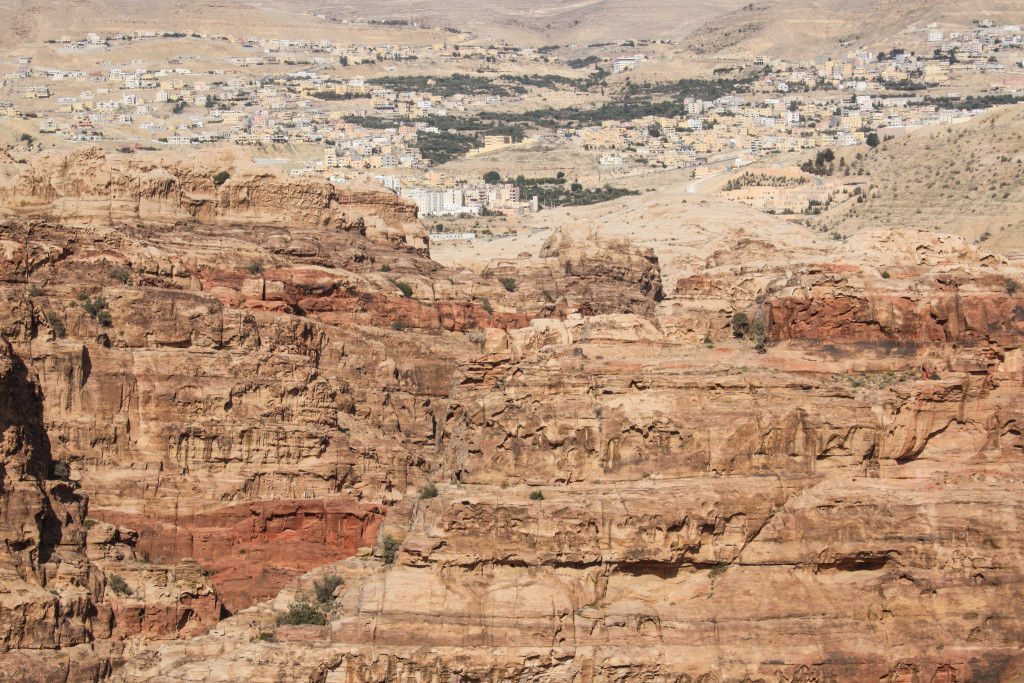 At High Place of Sacrifice

When passing by the Al Khazneh again on our way out, it was completely empty, hence our photo above with no one on it.

Overall Petra is an amazing place. We had a great time and definitely think about visiting again. The best bits were the ones outside the main crowds. We really enjoyed the solitude and exploring things pretty much by ourselves and finding out about the history of Petra through our guide. The fact that our hotel was so close to the entrance of the park was excellent and we managed to stay more time because of that. We would definitely recommend staying late in the afternoon.

One thing is for sure. There’s more to Petra than its best-known building – the Al Khazneh (The Treasury), that famously appeared in Indiana Jones and the Last Crusade.

Have you been to Petra or wish to go there? Tell us about it!

We were part of a guided tour, so the one-day entry was included. Up-to-date entry fees to visit the park are available at their site visitpetra.jo. Our accommodation was the Petra Moon hotel, a good hotel.

For more information on traveling to Jordan, visit the official site of the Jordanian Tourism Board – visitjordan.com.

Read our other articles about Jordan! 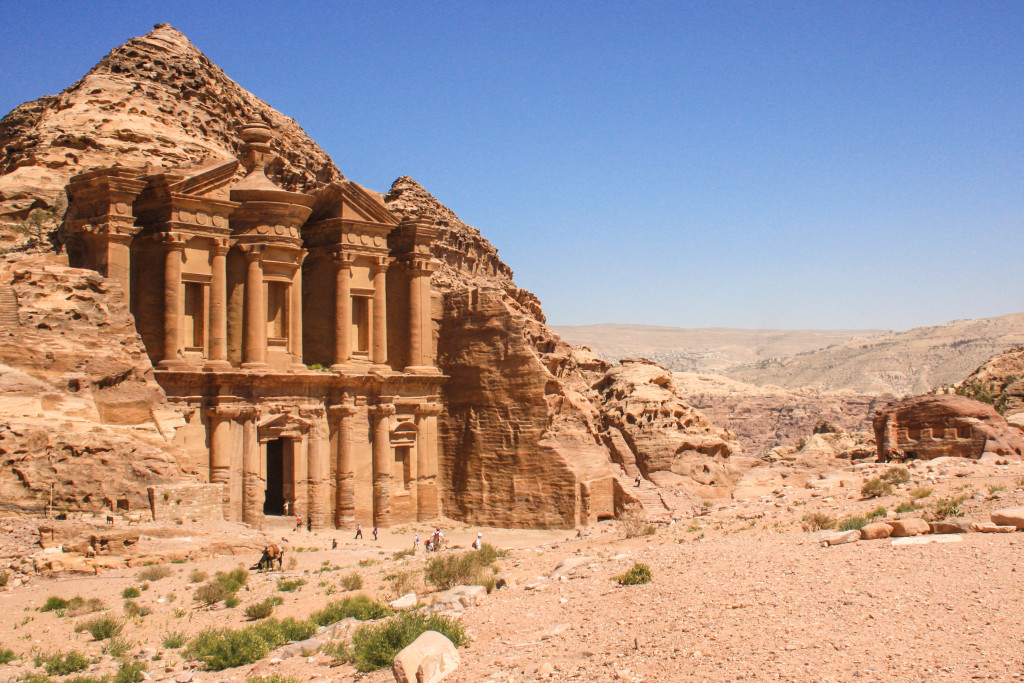