How we fail at whale watching - Breathe With Us 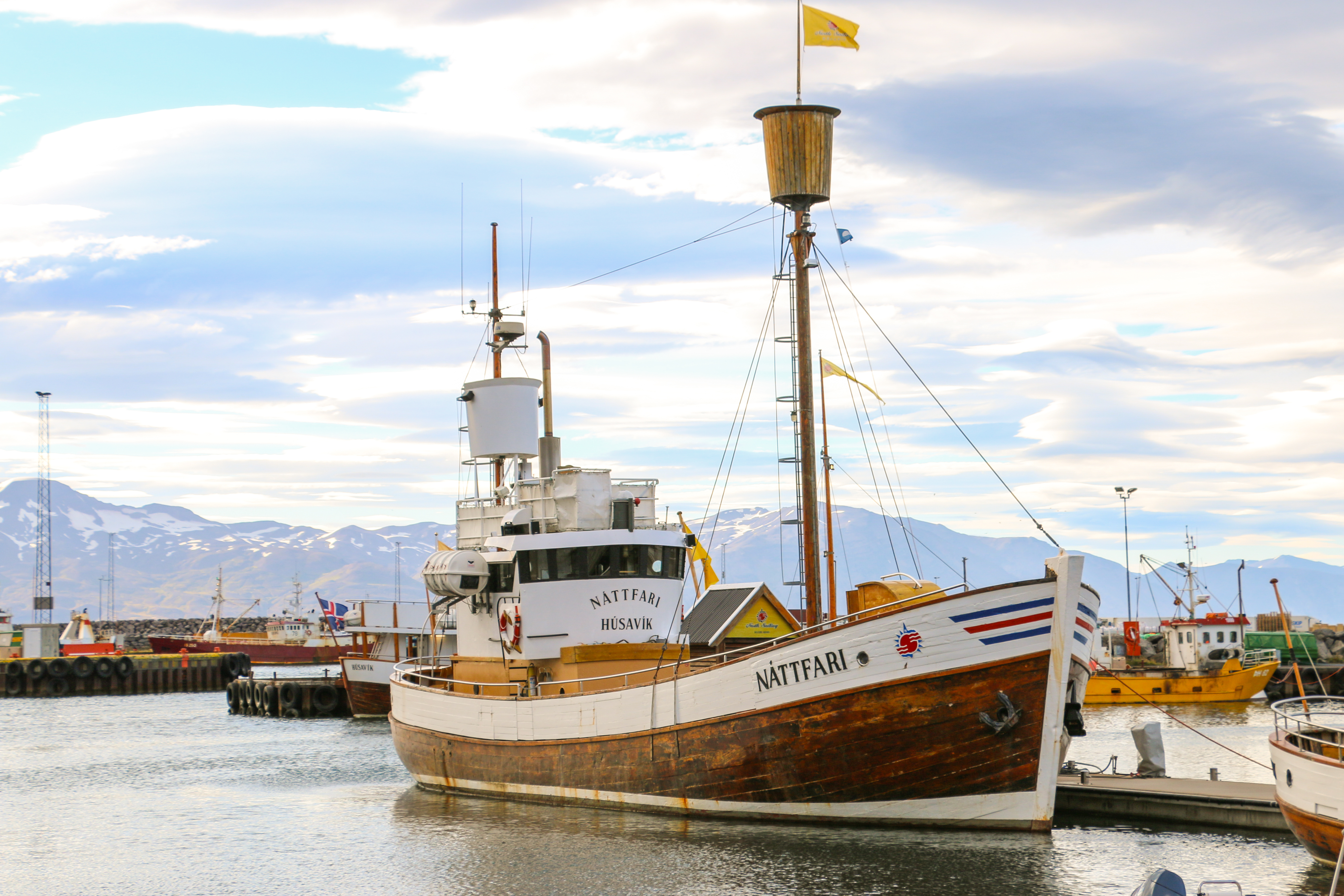 Whale watching is a very popular activity amongst tourists and travellers, with many good places available worldwide to do it. Over the past few years, we came across different opportunities to join whale watching tours on diverse points of the globe, and having done so on three occasions we managed to collect a few stories to share. Unfortunately for us these tours didn’t quite work out the way we expected, and thus we decided to put together this article on how we fail at whale watching – or, should we say, what to bear in mind when joining one of these nature encounter tours.

So why did we fail? Long story short, we only saw a couple of whales, small ones, and only at our third and most recent attempt. Far from the picture-perfect whale tail everyone dreams of seeing. This isn’t a complaint or whatsoever, it’s just to recap that whale watching can be affected by many factors that may turn your experience into a very frustrating one. Fingers crossed we are a bit luckier next time!

How it all happened

As mentioned before, we joined whale watching tours on three occasions. The first one was in the Portuguese island of São Miguel, in the Azores archipelago. Second in Kaikoura, New Zealand‘s South Island. Third and most recent in Húsavík, Northern Iceland. These three places are usually named amongst the world’s top whale watching destinations, by different publications.

Now, let’s get into more detail. 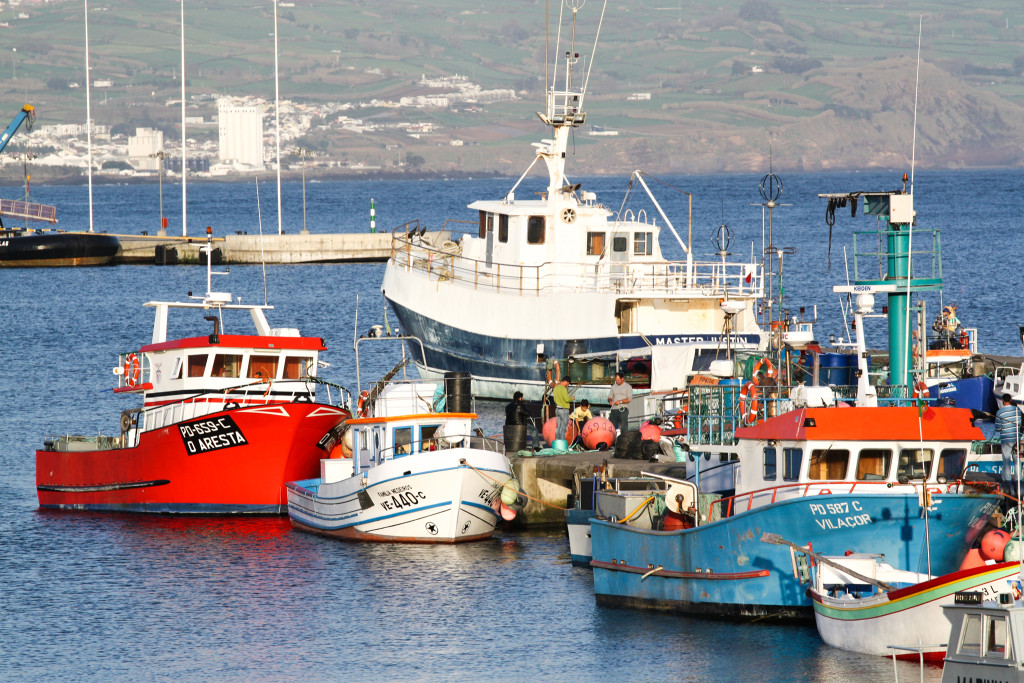 Attempt number one was back in 2011 when we were visiting the beautiful Portuguese archipelago of the Azores (Açores in Portuguese). We scheduled a tour right down at the harbour in downtown Ponta Delgada, São Miguel’s Island. This is a very short story as on the morning of the tour, and exactly when we were supposed to go, it started pouring rain and together with high sea waves the tour got cancelled right before it started. Not the very best first experience. The good thing is that the natural beauty of the island kept us occupied for the rest of our time. 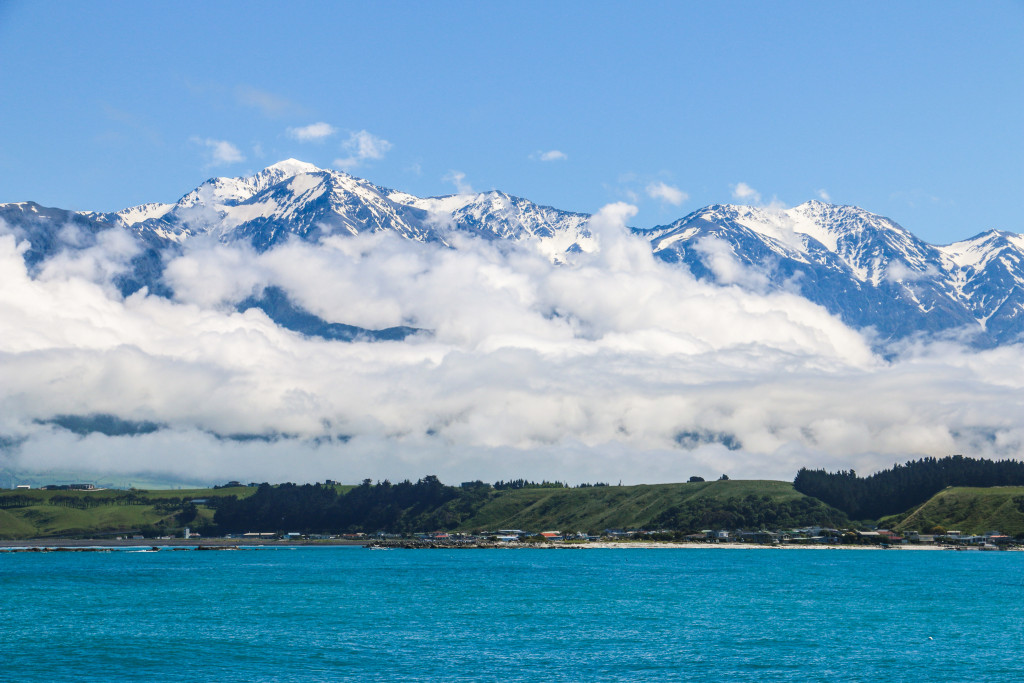 Second attempt. This time in Kaikoura, the whale watching capital of New Zealand. This is where everything went wrong. Clear sunny day with a long white cloud that couldn’t cover completely the snow capped mountains right on the doorstep of Kaikoura. A perfect start, we thought by then.

We went to the train station by the beach where the tours depart, via bus, to a small harbour less than 10 minutes away to the south. We were advised of good conditions and the prospect of spotting some whales, with minor turbulence. During the first half an hour, everything was alright. We even went to the upper deck at the boat’s first stop and saw some albatrosses. No whales so far. Suddenly things went crazy, and in what seemed a very calm sea, sea sickness struck. Before we knew, half of the boat was throwing up, us very much included. Hugo started first. The hot temperature probably didn’t help. For the next two hours, it was a mix of throwing up what was left in us and trying to drink water to stay semi-alive. Poor crew.

Gladly for us, during this very animated period of time no whales could be found, even far away from the coast. Closer to the harbour we could finally go outside and catch some fresh air. This is when we felt some life returning to us. Back at the office we sat by the beach for a good half an hour, trying to eat something. Terrifying morning in Kaikoura. No hard feelings as the view from the sea to the mountains makes it up for the rough times we had at sea.

Our boat in Húsavík

Our most recent attempt was during our trip to Iceland and while visiting the Northern part of the island. This part of Iceland is well known for whale watching, especially Húsavik. Scarred from our previous whale watching tour, we went for it again, but not without kindly asking first if the sea would be gentle with us, just before entering the boat.

It was cold, freezing actually. We were dressed for the cold, but on top of this we were given another layer for even further protection. Very fashionable. 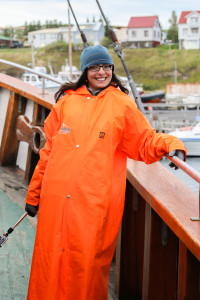 The tour lasted around 3 hours and the first half was completely eventless. No whales, as the crew was scouting the bay for them. One of the guides kept explaining a number of very interesting things about whales, including what kind of whales visit the area and also a bit of local history. Obviously, Hugo started to feel a bit nauseated as the sea got bumpier and decided to walk to the other side of the boat to get some even fresher air. It worked out and he braved the whole boat trip without throwing up! Clearly not boat-proof.

The boat turned back to the harbour well outside the bay. After trying some different areas, the guide screamed “2 o’clock”. That was the first glimpse of the whale. Everyone went to that side of the boat and.. nothing. A few seconds later the whale came back. It was a Minke whale. Success, we finally made it! Not exactly the kind of whale everyone was expecting, but still, a whale! Thrilled by this discovery the crew managed to find a couple more of the same species. Unfortunately, we were unable to get any decent photos. Happier and hungry, we arrived at the harbour!

From our experiences, we selected a list of factors to consider when thinking of joining a whale watching tour.

Whales might also be in season. In some places, you can go whale watching all year round, whilst in others just for a period or periods of the year, known as peak season. Whales can migrate for different reasons, including food and water temperature. Some areas of the globe are better suited for this, as they provide the environment these mammals need. It’s always best to do some research about it prior to joining a tour. It’s good to note that even in high season it cannot be guaranteed, although the probability increases considerably. Some operators state the probability of whale encounter and will refund you, usually partially if no whales were seen.

Weather plays a big role, particularly with sea conditions. If you get sea sick frequently this might be a problem. Yes, we should know better! Again, the tour operator should advise of sea condition and eventually cancel or delay if too rough, or in case of less ideal conditions for the whales to come to the surface and for the general safety of the tour.

Almost every time the tour will be on a boat. The boats vary in size and shape, they can be modern catamaran, old converted fishing boats or even smaller rubber ones, just to name some. Sometimes it will be possible to see the whales from the shore or even from a helicopter.

Overall going on a whale watching tour can be expensive. Sometimes the price will be prohibitive if on a tight budget. Yes, it varies across different places and eventually tour operators. We believe the cheapest tour we found was in California, one we didn’t join due to lack of time.

All the tour operators we joined seemed very eco friendly, never forcing or using bait to get the whales attention. All of them made this a strong statement, also mentioning some conservation work being done. The wellbeing of the whales and their ecosystem should be the number one priority.

The only certain thing about whale watching is that every time it will be different. On the bright side, our luck has been growing since the first attempt and we’re really looking forward to give it another go. These experiences gave us a better understanding of how it works.

Tour operators. We went with Whale Watch in Kaikoura and North Sailing in Húsavik.

One other thing to have in mind is that with whale watching you’ll be able to watch some birdlife and other marine life as well.

Hope you liked our stories and view on whale watching! Have you done a whale watching tour of some kind? Let us know where and how it went. 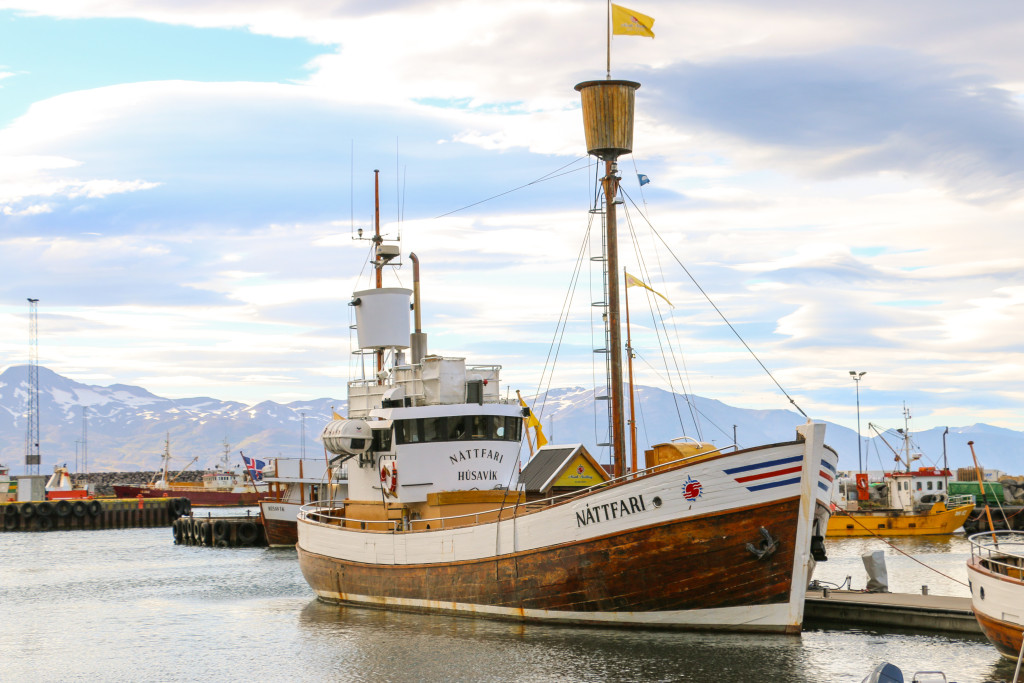