From Aswan to Abu Simbel - Breathe With Us 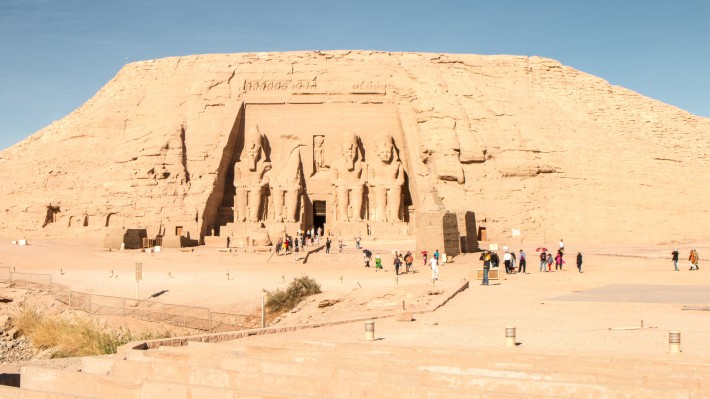 After the first couple days in Cairo, our trip in Egypt continued south to Aswan. Our goal for the stay in this region was to explore the sights of southern Egypt, including Abu Simbel. This journey ended up being a remarkable 12h sleeper train ride, something we had never done before!

Abu Simbel is the location of two incredible rock cut temples created during the reign of Pharaoh Ramesses II (13th century BC), in his honor and queen Nefertari’s. They are simply known as Abu Simbel temples and are part of a UNESCO World Heritage Site.

These temples are located deep in the south of Egypt, on the banks of lake Nasser and very close to the border with Sudan. To reach Abu Simbel from Aswan, a 3h and 300 km drive through the desert is necessary.

Traveling to Abu Simbel is done as part of a police convoy, whether on a bus, van or car. This is a requirement for all tourists due to security concerns. Two convoys depart daily at 4 am and 11 am, and return at 9 am and 4 pm.

The trip itself is very uneventful. The pain of a very early wake-up and a (not very good) breakfast box is only relieved by the first glimpse of the sunrise, for those who manage to stay awake. The convoy was far less exciting than expected. Heavily guarded police shoot off at high speed to sweep the road and probably get to Abu Simbel a good half an hour before everyone else. All safe, though!

Virtually all tourists travel to Abu Simbel on a day trip. Flights from Aswan are also available.

Relocation of the temples

Yes, you’re reading it right. The temples at Abu Simbel were relocated. As in, they were moved piece by piece from their original place to where they are now. Before we talk a bit more about it, here are two pictures of the temples to make you think about this astonishing accomplishment.

Our guide explained to us why and how this was achieved.

The construction of a new and important dam in the Nile (Aswan High Dam) would put at risk Abu Simbel temples due to the rising waters. With this in mind, a campaign was created in the 60’s by UNESCO to save the Nubian sites in the region, including Abu Simbel.

From 1964 to 1968, both temples were cut into exact and precise pieces, lifted and reassembled in the new and safe location, 200 m back and 64 m higher. This was one of the most important and challenging archeological works of all time. Millions of dollars were spent.

But that’s not all. The temples were originally cut into the face of the mountain, so a fake mountain had to be built to replicate the exact same thing. Even the orientation is the same!

The original site is now underwater of lake Nasser.

The temple of Nefertari is known as the Small Temple. Nefertari was one of the best-known queens and certainly a favorite of Ramesses since he dedicated this temple to her. The temple is also dedicated to the goddess Hathor.

The facade consists of 10 m high statues of Ramesses II and Nefertari. Apparently, this is highly uncommon, since female statues are usually much smaller. This reveals the importance of Nefertari.

Inside this temple, the walls depict offerings to the gods by Ramesses and Nefertari. Unfortunately, photography is forbidden inside both temples, which is a shame, because the interiors are truly magnificent.

Breathe With Us at Abu Simbel

The temple of Ramesses II is known as the Great Temple. Colossal is probably the right word to describe it. This temple is dedicated to Ramesses himself and also the gods Ra-Horakhty, Amun and Ptah. The facade features four 20 m high statues of Ramesses II, of which one is badly damaged, and other smaller ones from his wife and children.

Once inside, one can tell how big the temple really is. In the hypostyle, massive pillars in the shape of Ramesses as the god Osiris support the temple. The engravings depict Ramesses II paying homage to the gods and the battle of Kadesh. Ramesses considered himself a god! Plenty of side rooms allows for some time of exploration.

The orientation of the temple was an important aspect of the relocation, as they intended the sun rays to enter like they did originally. Twice a year, the rays illuminate the back wall of the temple, where the sculptures of the gods are.

Guides cannot go inside and it’s quite hard to really understand what’s going on with all that is written and engraved on the walls. A bit overwhelming, to be honest. Abu Simbel is without a doubt one of the most spectacular monuments we saw in Egypt. And it’s quite unique too. It reminds us of Petra due to the way the temples were built. We’re very glad we didn’t research much about the place before our trip so we could admire it properly.

As you can see in the pictures, there’s barely anyone there. Besides being very far from other main areas in Egypt, the current situation in Egypt is not helping tourism. Again, our visit was trouble-free, like the rest of the trip.

Bonus tip. If you’re staying for the night, there’s a light and music show.

Lake Nasser was created when the Aswan High Dam was built. Today, it’s one of the largest artificial lakes in the world. The perfect backdrop for Abu Simbel temples and home to the famous Nile crocodile.

Have you visited Abul Simbel? What do you think of these temples? 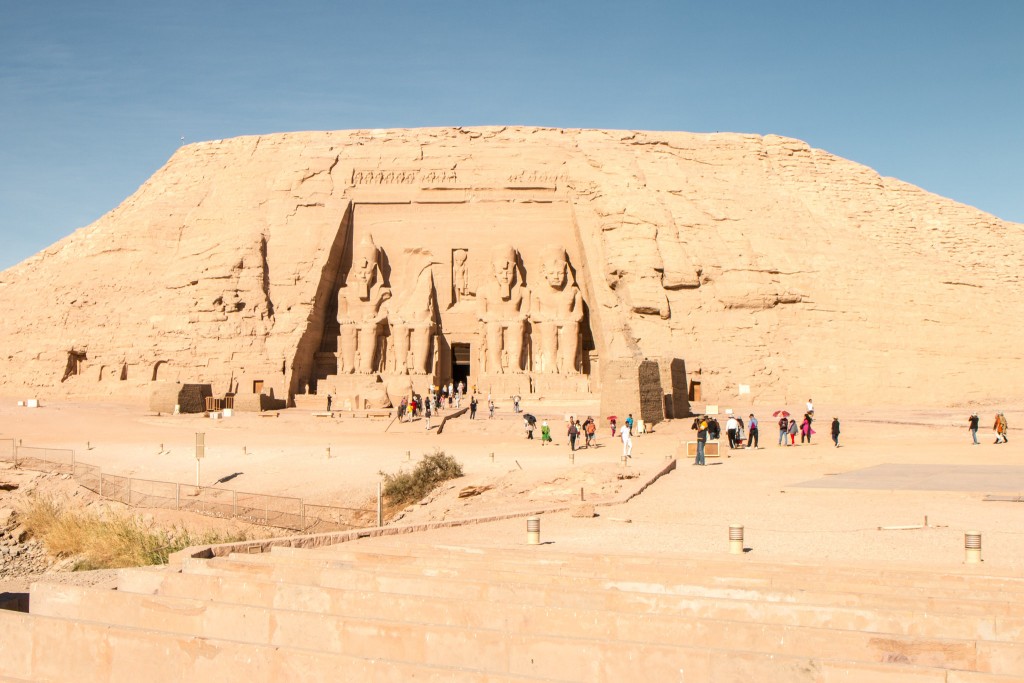